Andun worked with the demolition contractor DSM to provide demolition sequencing and temporary works designs on the White Hart Lane redevelopment during both phases of the demolition.

The demolition works were split into two distinct phases;

The phase 1 works of the White Hart Lane redevelopment comprised the partial demolition of the east part of the north stand and the north part of the east stand (NE corner). This allowed construction of core 6 of the new stand in advance of the closed season.

The purpose of the partial demolition was to remove sections from the northeast corner of the stadium and secure the structure temporarily. This is so the stadium could be used at a reduced capacity (4,000 seats were removed) until the end of 2016/2017 season.

In addition to the demolition sequencing and temporary works, Andun were responsible for the connection designs for the strengthening to the structure that was to remain. 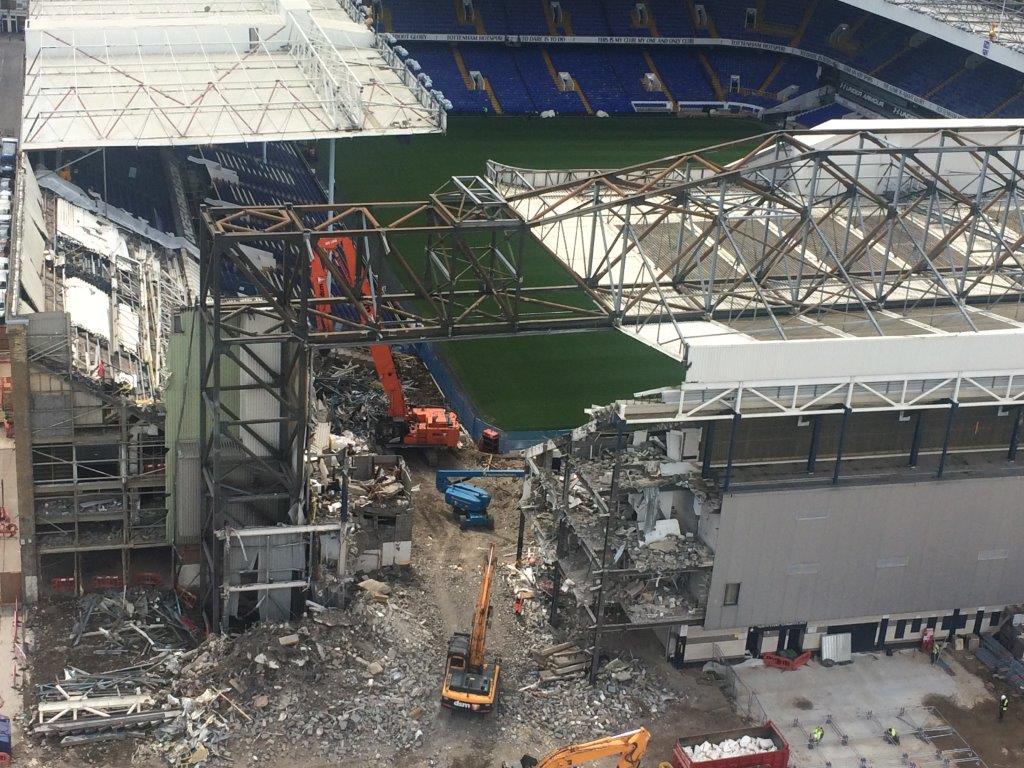 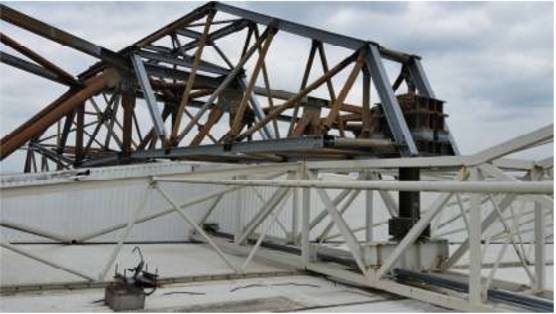 The cut back on the east stand roof required temporary bracing to be installed. F&N had designed a new temporary bracing system to permit this. These works comprised new diagonal bracing to stiffen the new end bay of the roof and strengthening of the existing diagonal plan bracing which was deemed insufficient in their review. 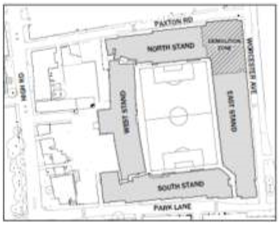 The proposed strengthening required the insitu preparation and welding of numerous cleats to the secondary trusses to permit installation of the new bracing. In addition the plan bracing was to be removed and replaced with heavier CHS struts.

Extent of works to the east stand

DSM requested Andun to review the F&N design proposals and where possible prepare alternative designs which would remove the complexity and difficulty of insitu welding.

The position of the secondary truss lower chord extending through the roof sheeting made insitu fabrication of the lower brackets particularly challenging and would have risked weld failures when tested.

Following this review we developed a series of brackets which fitted over the chords on the secondary trusses and were friction clamped into position.

Whilst this increased the amount of fabrication which could be undertaken off site, installation was much quicker and removed the need for any on site welding and tests. 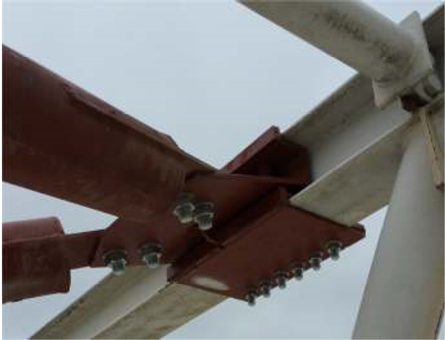 A sleeve system of strengthening of the plan bracing was also developed, again clamped into position and avoiding the need to remove the existing braces. The development of these alternatives significantly de-risked the project for DSM and enabled installation to be undertaken rapidly. 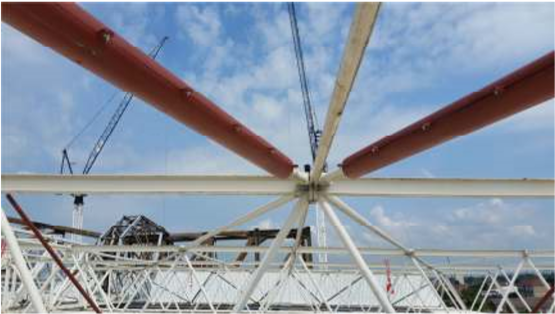 The free end of the shortened roof required additional support to resist wind loads. We developed a rise joint system of adjustable clamped struts which provided sufficient flexibility to cope with all the installation constraints. All designs were approved by F&N. 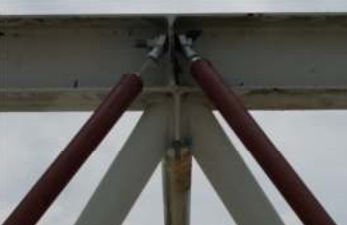 Support Roof JointThe sequencing of the works to allow the demolition of the NE corner of the stand was complex. Access was required for large plant through the north stand early in the project to allow removal of the east stand terraces to be removed. This was required as all the cables for the outside broadcasting unit ran through the section of the stand to be demolished and they had to be rerouted as a matter of urgency.

Plant could not access through the ground as the pitch was out of bounds. Strategic removal of secondary steel work allowed 35t excavators to transit the north stand. 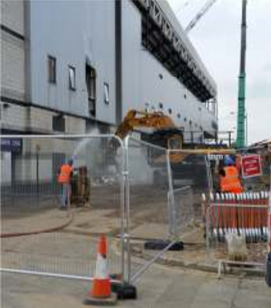 White Hart Lane North Stand DemolitionAndun then developed a series of sequencing drawings to facilitate the demolition of the remaining elements of both stands and expose the north stand truss support tower. This included development of lift plans to allow removal of the east stand primary and secondary trusses. 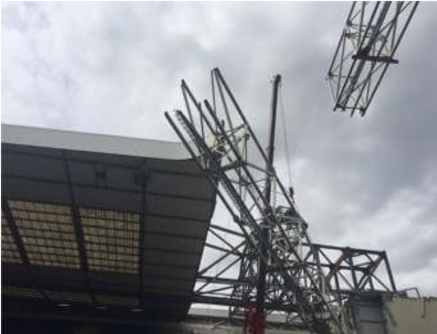 Following the dismantling of the roof steelwork on both the east and north stands the remaining demolition was undertaken primarily with ULR demolition machines.

These works were successfully completed by DSM to allow reopening of the ground to be reopened as scheduled. 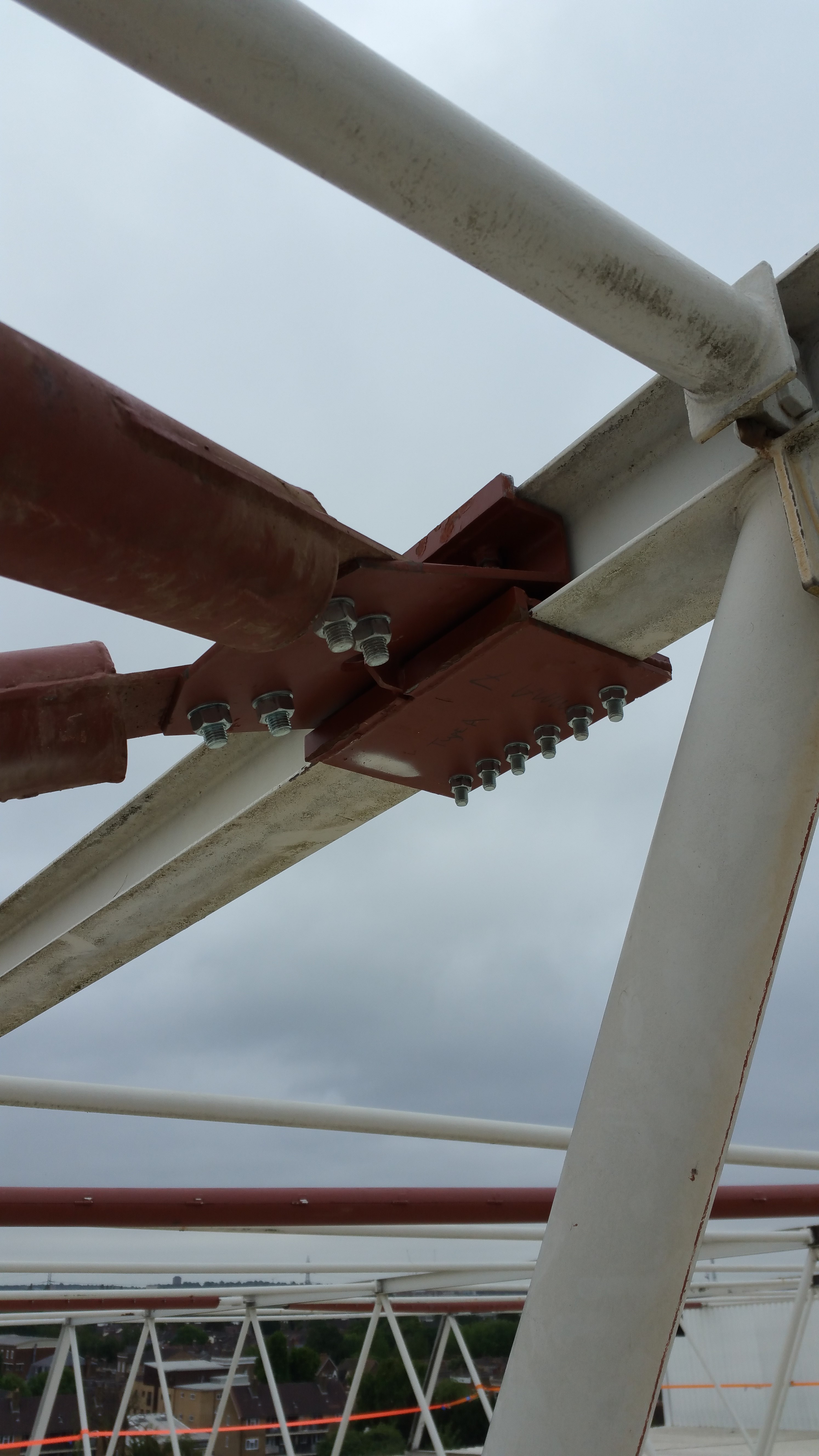